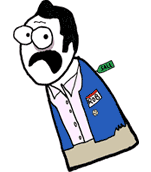 well, this weekend ended up being mostly twilight. let’s do an overview.

-hardly drawn comics took an undeserved dig at kristen stewart. what did she ever do to me?

-brainwashing sort of updated, but no one cared.

-then, THEN, came the beginning of something entirely different. A story driven comic? About Werewolves and Vampires? I wonder where this one is going?

Wow! You never know what’s coming next! Do you?

Sorry, that got a little weird…

look at how great i am at comedic observation:

monday mornings should be easier.

Man, I could base a whole career around that one line. Maybe have a talking cat. Anyhow, here’s this weekends updates:

–we learned about some of the types of kryptonite. that was one colorful planet.

–then, we tried our best to ruin a concrete layer‘s life.

that’s all for last week. This week, full frontal nudity! Not the kind you want to see. I’ve had some offers from shia labeouf.

the first weekend of the new WEEKEND UPDATE EXTRAVAGANZA schedule is passed. (still working on what to call it) Here’s an overview:

–First we learned the origin of bane’s name in the dark knight rises. there’s also a not-so-hidden secret featuring batman/jesus.

–Next, we see the bourne series diluting it’s matt damon contents even further. Additionally, i eventually learned that “bourne” is spelled with a “u.” what fun times we have.

–in addition, brainwashing was updated with a new advertisement. Everyone must have been really excited about that.

–And finally, there was a return of that mysterious symbol that haunted your dreams.

So there you go. our first weekend of updates. I can’t wait to show you what I’ve got brewing up for the coming weeks. thank you so much for checking it out.

See you next weekend!

we’ve already seen a brand new comics section added (along with an added secret. shhhh…) And things are just getting warmed up. check later tonight to see what else is coming.

OMG! Did Urnesto survive? I hope he doesn’t attract the rabid animals (pandas and such) that are roaming nearby! Oh no! Eggplants have blood?

Tune in next year to find out!

Here’s the new plan. Not only will there be an amazing Urnesto comic next week, but I will role out a new content schedule. New content will be released every weekend! Cartoons, comics, and whatever else I feel like doing. Saturday and Sundays will be the days to watch.

You have been warned.

lesser news: next one coming not before July… probably.

it’s getting close to my wedding date (I’m getting married!), so i’ll be cutting back production further. Though, I plan to experiment and see if I can come up with something even less animated.

i’m trying to find something that I can release in a more timely manner, in addition to the current stuff. any sugggestions on what you’d like to see are welcome. drop’em like they’re hot in the comment section, please.

it’s true! one year after my last video, the adventure continues. I’VE BEEN TROUGH TWO SITE REDESIGNS SINCE THEN. hopefully, this one sticks around for a while.

i don’t really have any advertising budget, so i hope the handful of people that see it enjoy it. You are part of a small elite subgroup of the internet.

be sure to brag to your friends.

I’ve been adding more secrets around. Even more to come.

And if that wasn’t enough, there may even be a new video within a couple weeks. Yeah, but I’ve said that before haven’t I…

There’s a new feature on BarelyAnimated.com.

But, it’s secret. You wanna check it out, go to the link above and scroll down to the bottom. So far, you can enter the Konami Code. Or you can get yourself a dogbrownie. There will be more secrets hidden around, and even in plain sight.